“Tears in my eyes” 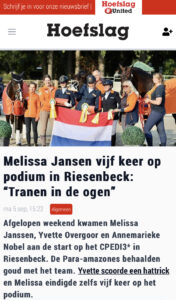 Last weekend Melissa Janssen, Yvette Overgoor and Annemarieke Nobel came to the start at the CPEDI3* in Riesenbeck. The Para-amazons won gold with the team. Yvette scored a hattrick and Melissa even finished on the podium five times.

Melissa Janssen has been on the podium before, but this weekend she accomplished five stage results with her two horses. “Already from day one, my teammate Yvette set a fixed score, which Annemarieke and I could connect to. The tone was set and all three of us wanted to go for it: team gold! The teaming really came up and defending our national flag was a huge honor,” said Melissa.

“Seeing my two horses Dreamy-Boy and Royal Rubinstein grow over the last few months gives me such wonderful satisfaction. It’s hard for me to describe my emotions, but what my horses have done for me this weekend is incredible. Dreamy-Boy achieved two podium places; the third and fifth place in the final qualify. Royal Rubinstein took second place in the individual test, making him eligible to start in the freestyle, on Sunday. 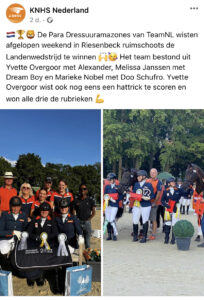 It was really goosebumps in the freestyle. He danced through the arena and took me into his story. As a result, we finished in second place with no less than 74.65%. I really had tears in my eyes!”

A major performance of Thomas. Her trainer, personal coach and rider of her horses up to grand prix level. In a six months time window they achieved this goal as a team.